My rating: 5 of 5 stars
Time travel was the hook that got me to listen to this audiobook, but the story as a whole is completely engrossing, painfully unflinching, and exquisitely detailed. Emotions run very high much of the time. The story is told in first person from Dana's point of view, so you're really in her head the whole time, seeing and hearing what she does, as well as being privy to her thoughts and feelings. Kim Staunton narrating this story gives a powerful performance that really pulls you in.

I've read about slavery before in books like Uncle Tom's Cabin and Tom Sawyer, but I don't think it's ever been as real a concept as when listening to this book. Dana, as a black woman from 1976 L.A. can't even properly conceive what it was really like until she was pulled back to the early 1800's and had to live it. It's not just about people being property or people not having rights or people being sold away from their families; it's about them being dehumanized by the slaveholders, the overseers, and any other white person they encountered; it's about them being seen as not even people. Some slaves were so broken by this that they also thought this way. I can't say that I'll ever really understand, but I cannot recommend this book highly enough for its ability to convey some sense of what it must have been like.

View all my reviews >>

I've updated all the movie and book reviews from this year with the appropriate tags:
2010 movies, movie reviews, 2010 books, book reviews

I'm also using a lovely tool available at goodreads.com that formats my reviews for me with a cover image and links to the title and author pages on goodreads so that I can just copy and paste code over to LJ. I'm also adding a link to my source for the book.

I'm formatting the movie reviews the same way with movie poster image and a link to the Netflix page for it. 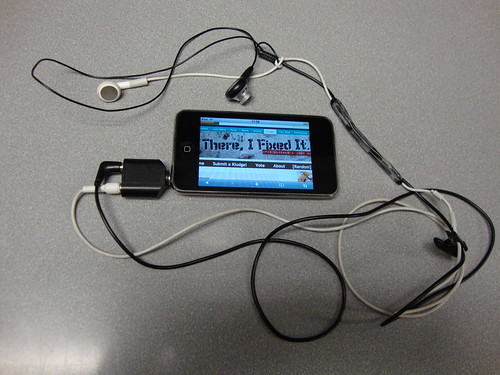 Spot the cat bit through the wire to my iPod's right earbud last night. I also had a pair of Philips earbuds which had a malfunctioning left earbud, so, i used a mini-jack splitter and put the two good halves together. So now I can listen to my iPod in stereo. Works great! I have ordered a new set of buds from Apple, the ones with the remote and mic.